Yoga in the Redwoods with Janet MacLeod 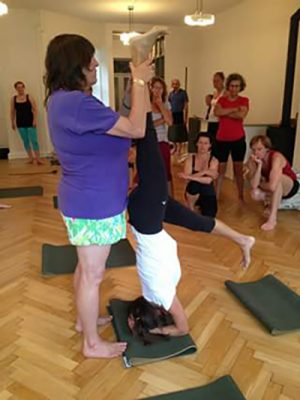 Janet will guide the students to work at each level to explore all areas of the practice of yoga asana: standing poses, forward extensions, backward extensions, inversions and twisting poses. In her joyful manner she will provide an insight into a well-rounded and thoughtful practice.

Students may bring lunch or go out on the two-hour break on Saturday.

Certified as an Iyengar Yoga instructor in 1983, Janet continues to study with the Iyengar family in India and in the west having attended many conventions. Her teaching style is demanding on all levels; this combined with her ability to create a joyful atmosphere in class that has a transformative effect on students.

She teaches classes to the general public in San Francisco; teaches in the Teacher Training Program at the Iyengar Yoga Institute of San Francisco (IYISF) and conducts retreats and workshops worldwide.

Although Janet is involved with yoga much of the time, she has other interests, including her birth place – the isle of Skye, Scotland; roses; her cats jasmine and tesla; preparing healthy organic vegetarian meals – especially salads and developing her exotic shoe collection.