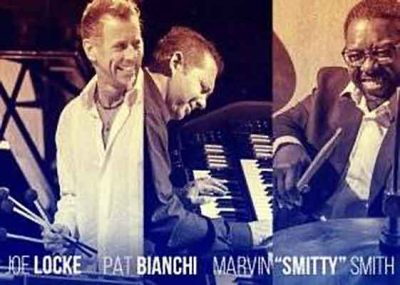 BIOGRAPHIES
Joe Locke
Joe Locke is widely considered to be one of the major voices of his instrument. Long known to be a soloist capable of stunning physical power and broad emotional range, it was not until the last decade that he emerged as the composer, band leader and conceptualist that he is considered today.
This is in no small part due to his recent solo projects, notably “Four Walls of Freedom” (Sirocco), a 6 movement suite featuring the late tenor saxophonist Bob Berg; “Live in Seattle” (Origin) by The Joe Locke / Geoffrey Keezer Group which won the 2006 Ear Shot award for Concert of the Year and his eloquent and vibrant quartet “Force Of Four” (Origin).
Since joining Motéma Music in 2011 Joe has released three intrinsically different albums bearing witness of his immense stylistic versatility and ability to create artistic depth in a variety of contexts:
After “Signing”, the long awaited follow-up studio album of “Live In Seattle” 2012 also saw the release of Joe Locke’s first ever symphonic project, “Wish Upon A Star”, featuring Locke’s Quartet with Lincoln Nebraska’s Symphony Orchestra, and the Jazz radio charts #1 Blues & Ballads album “Lay Down My Heart” in 2013. Locke’s latest Motéma release “Love Is A Pendulum” – a suite based on a poem by Barbara Sfraga – is already being hailed the most important work of his career.
Locke has won numerous awards and polls, including the 2006, 2008, 2009 and 2016 “Mallet Player of the Year” award from the Jazz Journalists Association. In 2016 he was honoured with the induction into the Music Hall of Fame of his home town Rochester, NY. He is active as a clinician / educator. In 2008 and was appointed International Vibraphone Consultant by the Royal Academy of Music, London – a position which he holds on a visiting basis – and received the title of Honorary Associate of the Academy (Hon ARAM) in 2014.

Pat Bianchi
Grammy nominated organist Pat Bianchi, continues to establish himself as one of the foremost organists on the scene today. His command of the instrument, harmonic prowess, rhythmic intensity as well as his sensitivity and versatility are rivaled by few. In 2016 Bianchi was named “Rising Star Organist” by Downbeat Magazine.
After spending a number of years both teaching and performing in Denver CO, Bianchi returned to New York City in June of 2008, soon after, he officially joined The Lou Donaldson quartet in 2009. Continuing to play with Lou, Bianchi also joined Pat Martino’s working trio in 2011 while taking on the responsibilities as musical director. Bianchi is featured on numerous recordings such as Tim Warfield’s Sentimental Journey, a follow up to Warfield’s recording One For Shirley (on which he also appears) as well as guitarist Chuck Loeb’s release, Plain and Simple. At this time Bianchi also continued to perform with drummer Ralph Peterson Jr., forging ahead with The Unity Project. Bianchi was featured, recording much of this material on Peterson’s CD Outer Reaches. Soon after Bianchi released his second recording as a leader, Back Home. This recording features Terell Stafford, Ralph Peterson Jr, Wayne Escoffery, Carmen Intorre Jr. and Gilad Hekselman.
While still actively performing with both Pat Martino and Lou Donaldson, Bianchi not only continues to collaborate with many well known musicians. He also leads a number of different groups including his trio (which is featured on his latest release A Higher Standard), as well as a unique organ duo featuring drummer Sanah Kadoura. Also Bianchi continues to promote his all star organ group The Organic Collective.
His upcoming album will feature an array of special guests including Pat Martino, Kevin Mahogany, Joe Locke, Peter Bernstein, Paul Bollenback, Byron Landham, Carmen Intorre, Jr. is due to be released in the summer.

Marvin ‘Smitty’ Smith
Born and raised in Waukegan, Illinois, Smitty’s earliest musical influences included traditional Jazz, American folk, East Indian music, African music, and Soul. After attending Berklee College of Music in Boston, Smitty moved to New York City in 1981.
Since that time he has performed with Branford Marsalis, Terance Blanchard, Donald Harrison and Sting among many others. Smitty is currently the house drummer for NBC’s Tonight Show Band.
“It was a very natural inclination for me to play drums,” says Marvin “Smitty” Smith. A glance at his early life validates that truth. Born the son of a drummer, Marvin, Sr., was always surrounded by music in the house.
At six months old, he would climb up on the large lounge chair positioned directly in front of his father’s drum set and would watch him practice, intensely. Whenever his father took a break, he would crawl over and press the foot pedals and attempt to emulate his dad. That experience, and banging on pots and pans, was the extent of his playing until he began formal training at the age of three.
Today, Marvin “Smitty” Smith is a young musician extraordinaire whose work has been described as a “comment on invention, firm and adventurous time and technical sufficiency.” He has traveled extensively throughout the Orient, Europe, and the continental USA; and he has shared the stage with such greats as Sonny Rollins, Hank Jones, Frank Foster and Frank Wess, Art Farmer, Benny Golson, Slide Hampton, and Milt Jackson. He is a former member of the Ron Carter Quartet, The New York Jazz Quartet, and The Art Farmer/Benny Golson Jazztet.
Featured on more than 45 albums, additional performances and recordings augmented with Terence Blanchard and Donald Harrison, Ray Brown and Phineas Newborn, George Shearing, Bobby Watson, Hamiet Bluiett, Branford Marsalis, David Murray, Emily Remler, Peter Leicht, Kevin Eubanks, Donald Byrd, Monty Alexander, Diane Reeves, Michel Camilo, and Grover Washington Jr. Currently he’s a member of Steve Coleman’s Five Elements, and The Dave Holland Quartet. Smitty conducts seminars and clinics for students in jazz workshops, both in the United States and Europe; and is currently on staff of jazz program at the Banff Centre of Fine Arts, Canada, and Drummers Collective, New York City.
Smitty has been Downbeat Critics’ Poll winner for Talent Deserving Wider Recognition, 1985 through 1987, and 1989. Smitty performed on the Soundtrack of filmaker Spike Lee’s “School Daze”, appeared in Sonny Rollins’ music video “Saxophone Colossus”, and a member of Sting’s “Nothing Like the Sun” South American tour, 1987.
Regarded as a well rounded musician with the ability to play all styles, Marvin “Smitty” Smith is a blossoming composer and arranger, and his success has earned him two albums as a bandleader. As a versitile drummer, there seems to be nothing be cannot do. It’s been said that he is the “John Coltrane of the drums.”