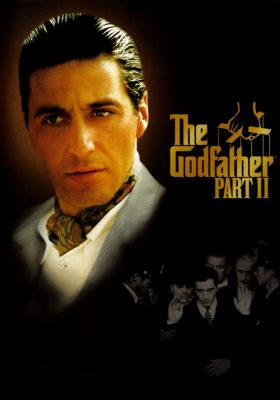 The early life and career of Vito Corleone in 1920s New York is portrayed while his son, Michael, expands and tightens his grip on his crime syndicate stretching from Lake Tahoe, Nevada to pre-revolution 1958 Cub

In this legendary continuation and sequel to his landmark 1972 film, “The Godfather,” Coppolla parallels the young Vito Corleone’s rise with his son Michael’s spiritual fall.
The Corleone family roots are explored, tracing Don Vito’s journey from Sicily to a life of organized crime in New York. In a parallel story, his grown son Michael extends operations to Cuba and contends with more betrayal and murder.

An Oscar winner for Best Picture, the film received widespread acclaim from critics, with some deeming it superior to the 1972 original. Nominated for eleven Academy Awards and the first sequel to win for Best Picture, its six Oscars win included Best Director for Coppola, Best Supporting Actor for De Niro and Best Adapted Screenplay for Coppola and Puzo. Pacino won the BAFTA Award for Best Actor and was nominated for the Academy Award for Best Actor.

Both this film and its predecessor remain highly influential films in the gangster genre. In 1997, the American Film Institute ranked it as the 32nd-greatest film in American film history and it retained this position 10 years later. It was selected for preservation in the U.S. National Film Registry of the Library of Congress in 1993, being deemed “culturally, historically, or aesthetically significant.”

Each screening is preceded by a movie trivia quiz (with popcorn prizes!), and is followed by audience discussion. We occasionally have Q&A with the filmmakers.