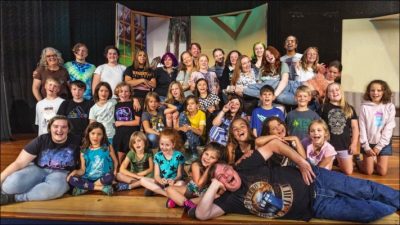 Opens July 29 at Willits High School With A Cast of 33 Kids.

Photo: Members of  the cast and crew for the musical “Annie Jr.” opening July 29 at Willits High School are drawn from the Willits Community Theatre’s 2022 Gate to the Stage Summer Camp. Photo by Mathew Caine:

The musical “Annie, Jr.”,  based on the classic rags-to-riches story of the young orphaned girl who finds happiness, opens at Willits High School on Friday, July 29.  A production of Willits Community Theater, the show will feature a cast of 33 children ages six to high school from WCT’s Gateway to the Stage Summer Camp. The show is co-directed by Tim Fischer and Robert Ford, with choreography by Oz Montelongo Medina and vocal direction by Tina Marie Silveira.

The show is based on the 1977 Broadway musical, which features song and dance, and in turn was based on the Little Orphan Annie comic that ran in publication from 1924 to 2010. Fischer says “Annie Jr” is an intentionally truncated version for the kids, while maintaining the important essence of the story, and keeping the dancing and the familiar songs: “Tomorrow” “It’s a Hard Knock Life,” and “I’ll never Be Anything Without You.”

Fischer heralds the play for its recreation of the original story’s optimism, which struck an important note during the Great Depression of the 1930s. He says, “There’s certainly some resonance for our actors and our community after what we’ve gone through in our recent times.” Fischer directed last year’s summer camp production of “Oz-The Musical!” and he’s excited that this year some of the previous camp students are now an integral part of the direction and stage management crew.

The show is also different from previous WCT summer camp productions in that thedirectors have cast understudies in some of the larger roles. The understudy night is Thursday, August 4, when a second line of actors will lead the performance.

Fischer says the importance of the understudy program goes directly to the goal of the academy, which is to foster growth in all the children who participate. He says, “Helping all the kids to see something in themselves they didn’t see before is our ultimate goal.”

Performances will run from July 29 through August 7, with shows on Thursday, Friday and Saturday at 7pm, and Sunday matinees at 2pm.

Tickets for the shows are $10 and available online at wctperformingartscenter.org or at the door.

Audience members will be seated in the Allen J. Garcia auditorium at Willits High School using the “festival seating” method, and those attending can sit wherever they like. Vaccinations against Covid -19 and the wearing of facial coverings are recommended, but not required.

Tickets for the shows are $10 and available online at wctperformingartscenter.org or at the door.

Performances will run from July 29 through August 7, with shows on Thursday, Friday and Saturday at 7pm, and Sunday matinees at 2pm.