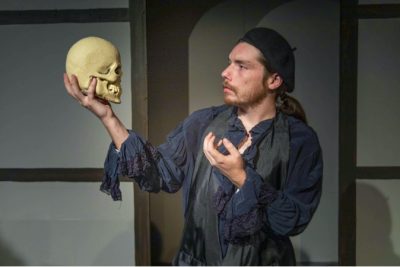 Due to directives from the County Health Department, the venue has been moved from the theatre playhouse to the outdoor plaza at 77 S. Main St, Willits

​A comedic medley of classic Shakespearean moments unfolds in The Complete Works of William Shakespeare, Abridged presented by Willits Community Theatre at the outdoor plaza, 77 S. Main Street in Willits.

The hilarious rendition of the Bard’s most well-known scenes collected into one show is the brainchild of Renaissance Fair actors Adam Long, Daniel Singer and Jess Winfield, who first conceived the comedy in the 1980s and then revised it in 2011.

​Starring in the hour and a half production are WCT veterans Mike A’Dair and Jeff Shipp, along with newcomer Sam Porter, all of whom appear in the many different roles, from Othello to Hamlet, and Juliet, and other female characters.

​“It’s a really fun show,” says A’Dair who also directs. “For those who admire Shakespeare’s genius, it puts his work at a level of enjoyment for anyone.”

​Rendering all 37 of the Bard’s works into an hour and a half means that quite a few liberties have been taken.  Othello becomes a rap song. All 16 comedies are blended into one spot. Julius Caesar is shortened to less than a minute and Antony and Cleopatra is cut even further.  The result, says A’Dair, is non-stop hilarity.

​Tickets are $10 for the Sunday matinees at 4pm, and the Thursday, Friday, and Saturday evening shows at 7:30pm. Tickets may be purchased online at wctperformingartscenter.org or at the plaza at time of show.

Patrons will be asked to wear a facial covering while attending the show.