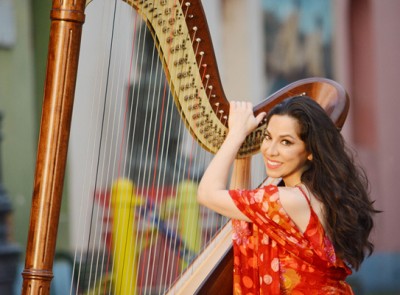 Anna Maria Mendieta, principal harpist with the Sacramento Philharmonic and Opera, has performed with orchestras and chamber music groups across the country and beyond including the San Francisco Symphony, San Francisco Opera, San Francisco Ballet, Russian National Orchestra, and the Russian State Ballet.

She has performed for Pope Benedict XVI, President Clinton, President Gorbachev, the King and Queen of Spain; for National Hispanic Week in Washington D.C., 2011 World Youth Day events in Madrid, and at the Vatican. Ms. Mendieta has been honored with concertos especially composed for her including a commission award from the American Harp Society which she premiered in 2013.

With many albums to her credit, Anna Maria has appeared in movies, television, NPR, and the Emmy Awards. She has performed with Frederica von Stade, Josh Groban, Frank Sinatra Jr, Olivia Newton John, Charlotte Church, Moody Blues, John Denver, and Barry Manilow, who calls her his “favorite harpist”.

Ms. Mendieta performs all styles of music from classical to contemporary, and is recognized internationally as a pioneer in performing Argentine Tango music on the harp with praises recognized by The American Symphony Orchestra League as an “exceptional and charismatic [concerto] soloist”.

Her creation of “Tango del Cielo”, a national touring concert-show, is the focus of a documentary film. When she’s not pulling strings, Anna Maria is out on the dance floor as a part of the show.