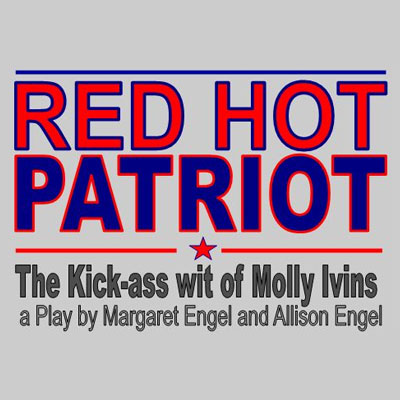 “Red Hot Patriot – The Kick-ass Wit of Molly Ivins” as presented by Mary Burns opens for its two-week run at Willits Community Theatre on Friday, September 23.

The one-person show celebrates the amazing wit and power of the famed Texas political satirist who for nearly four decades poked fun at American foibles. Written by twin sisters and journalists Margaret and Allison Engel, the play is an authentic rendition of Ivins’ life, drawn in part from her incisive and often funny opinion columns, and performed on stage in the form of incoming AP News bulletins, along with multi-media photos, sound and music.

Burns brings her considerable talents to portraying the wit of Molly Ivins after appearing on the WCT stage in numerous acting roles over the years. She says she was drawn to the Ivins material mainly out of her love for the columnist’s brilliant use of humor in writing about the outrages of her times, from racism to cynicism, and inequality. “The issues she wrote about are so close to my heart, and many are yet to be resolved,” says Burns. She points out that Ivins belongs to the enduring American tradition that includes Mark Twain to Jon Stewart and Garry Trudeau when it comes to poking fun at the hypocrisies and inanities of government officials.

Ivins, who died in 2007, certainly loomed larger than life as someone who was sharp, devastatingly honest, very brave – and hilarious. She was known for having a huge heart, a generous spirit, and a true patriotic love of America and her home state of Texas.

Directed by long-time WCT veteran, Mike A’Dair, the show is a second-stage production with limited sets and props, while the focus draws on the work of one amazing human being. As such, it is sure to be a pertinent pleaser during the current political election season.

Tickets will also available at the door until sold out.