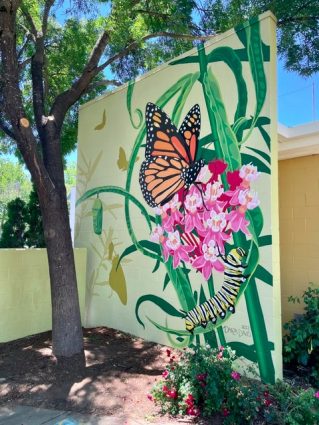 Celebrate public art and pollinators at the Ukiah Farmers’ Market 9 am to noon June 25. Take a peek at the brand new monarch butterfly mural by local artist Danza Davis in Alex Thomas Plaza just in…

Celebrate public art and pollinators at the Ukiah Farmers’ Market 9 am to noon June 25.

Completion of Monarch mural will be celebrated Saturday in Ukiah

In honor of National Pollinator Week, the mural featuring a Monarch Butterfly that was recently completed in the Alex R. Thomas Jr. Plaza will be celebrated this Saturday in downtown Ukiah.

To artist Danza Davis, the timing of the event could not be more perfect, as she hopes her portrait of a Monarch on milkweed, its main food source, will inspire as many people as possible to learn more about not just that butterfly, but all of the pollinators whose crucial work supports the web of life.

“Pollinators and the plants they depend on evolved together,” said Davis, explaining that she planted plenty of milkweed at her home in Potter Valley in the hopes of feeding butterflies. “The milkweed came back beautifully this year, and now I’m keeping an eye out for the butterflies. You have to just grow their food, and hope they find it.”

And while you may not be able to find a Monarch in Danza’s garden yet, you are certain to find one enjoying the milkweed in her mural spanning a 14-feet-by-14-feet wall in the plaza at 300 S. State St. Also featured with the adult butterfly is a caterpillar, and in silhouette there is a cocoon, from which a butterfly is shown emerging and flying away.

Danza completed a much larger mural at the Mendocino County Juvenile Detention Center, and more recently completed a mural at Ukiah High School last year, but the mural in the plaza is definitely her most publicly accessible mural so far in Ukiah.

“It’s wonderful that people can just happen upon it while they are out and about,” said Davis, explaining that she waited to start painting the mural in earnest until the day after another artistic event, Pastels in the Plaza, since she did not want to detract from those efforts.

But many at that event learned her mural was coming, and Danza said some people came back to check on her progress, which she very much appreciated.

After about “twelve working days,” Davis said she completed the mural, fortunately finding a good window between the late rain and this week’s heatwave.

The grand opening for the mural is scheduled for Saturday, June 25, at 10 a.m. The mural is located in the plaza, 300 S. State St., on a wall of the restrooms building that faces east.

More of Davis’ work can be seen in the promotional materials for this year’s Sundays in the Park concert series. Davis said she included Monarchs in that artwork, as well, and the butterflies are featured in the backdrop for the concert stage in Todd Grove Park.