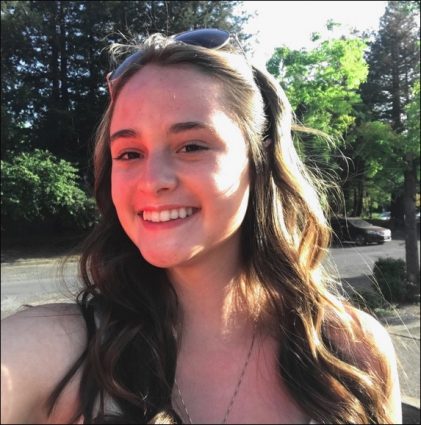 Sidney Regelbrugge, a sophomore from Point Arena High School in Point Arena (and also Mendocino County’s Youth Poet Laureate), took first place in the Mencoino County “Poetry Out Loud” competition on February 22. Regelbrugge was one of thousands of students across the state to participate in the national recitation contest, a program run by the California Arts Council in the state and started by the National Endowment for the Arts (NEA) to engage high-school students in the presentation of poetry through memorization and performance. Regelbrugge advances to the virtual California state finals in Sacramento. At stake are hundreds of dollars on the state competition level and thousands at the national finals of Poetry Out Loud.

Mendocino County Program Coordinator and POL teacher Blake More says, “The judges felt Sidney’s recitations were especially masterful, and her poised comprehension of each of her chosen poems is what put her on top.  However, to be clear, this year’s competition was extremely close. Four of the top students were mere points apart. All who competed should feel very proud of their accomplishments.”

“Young people interested in rap and slam contests can be surprisingly interested in classical poetry when it’s presented through the Poetry Out Loud competition,” said Muriel Johnson, Director of the California Arts Council. “We’ve seen students from all backgrounds and academic levels embrace this program wholeheartedly. It can change their lives.”

The Poetry out Loud program seeks to foster the next generation of literary readers by capitalizing on the latest trends in poetry: recitation and performance. Poetry Out Loud competitions start in the classroom, then at the school, region, state, and national finals, similar to the structure of the spelling bee. The national initiative is part of an attempt to bring literary arts to students, a critical need in U.S. schools, according to a 2004 NEA report Reading at Risk that found a dramatic decline in literary reading, especially among younger readers.

For more information on Sidney Regelbrugge or to set up interviews, contact Blake More.  General information can be found at www.cac.ca.gov and www.poetryoutloud.org, and reporters interested in more information about the statewide program may contact California Arts Council communications info@cac.ca.gov or 916-322-6588.