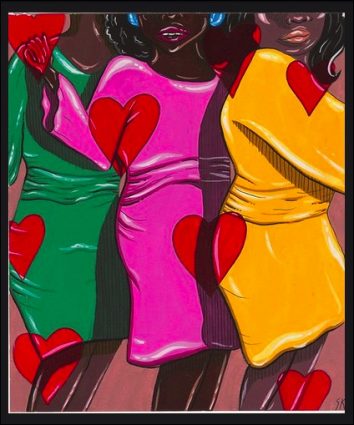 Congressman Jared Huffman (D-San Rafael) recently announced the results of this year’s Congressional Art Competition for California’s Second District, which was open to all high school students in Huffman’s district.

Humboldt County’s finalist was Fiona McNiel, from Academy of the Redwoods, with “A Girl in Waiting.”

The winner of the competition (and Marin County’s finalist) was Samuel Lopez, from Fairfax, a Terra Linda High School student, whose artwork is titled “Boy in a Blue Mask.”

“Congratulations to Samuel for this achievement. His resolve is beyond anything I’ve seen in my time holding this competition,” Huffman said. “Samuel has muscular dystrophy and is in a wheelchair. His dedication to continue this hobby, despite the significant challenges he faces even holding a pencil, is a remarkable example of what it means to be resilient and overcome even the most daunting obstacles.

“Students from across the Second District all demonstrated a similar fortitude and exceptional artistic talent in the face of being separated from the classroom and their peers over the past year. I applaud all of our participants for their endurance and creativity,” Huffman said.

“Boy in a Blue Mask” will hang in the U.S. Capitol for a year along with artwork from every congressional district in the United States. Samuel will also be invited to a reception and receive a certificate of Congressional recognition.

“Each spring, the Congressional Institute sponsors a nationwide high school visual art competition to recognize and encourage artistic talent in the nation and in each congressional district. Since the competition began in 1982, more than 650,000 high school students have participated nationwide,” a news release from Huffman’s office stated.