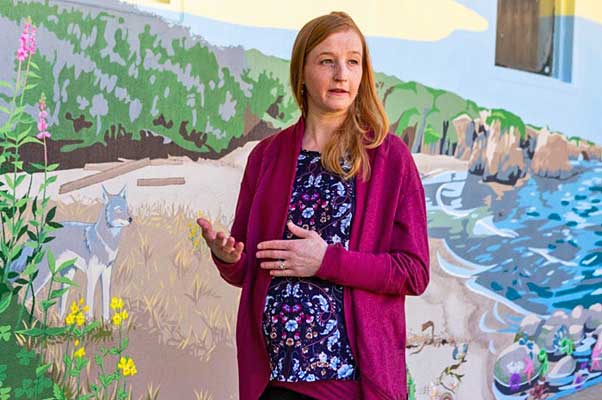 On the Wall – In the Hall

A collaborative mural project between the Mendocino County Juvenile Hall and the Arts Council of Mendocino County has transformed the facility’s interior quad, providing incarcerated youth with opportunities for artistic expression and success in project management while providing inspiration for future inmates and a longer-term impact reaching beyond the walls of the facility.

Dave Barrett, Juvenile Hall Supervisor and Alyssum Wier, executive director of the Arts Council of Mendocino County worked together to create a novel project- the design and painting of two murals on the walls of the Hall’s interior courtyard. The three-year, multi-phase project was funded by the Arts Council’s Get Arts in the Schools Program, the Community Foundation of Mendocino County, Dean and Sharon Edell and the California Arts Council JumpStArts Grant.

Davis, a Mendocino County native received dual degrees in Studio Art and Botany from Humboldt State. She deepened her knowledge with an additional study of science illustration. “This enabled me to use art as an educational tool,” Davis explains.

To begin the mural’s design process, Davis began by asking the students to recall the plants, animals, insects, and trees that reminded them of home. From there, she brought in research materials to help them accurately render the colors and shapes of the flora and the critters who inhabit the mural. “We had a lot of brainstorming in class. The students were provided reference books to help spark their recognition, and for the second mural, we also used the iNaturalist site to help the students learn about the various ecosystems- the vocabulary they needed to accurately express their observations.”

The mural was mocked up by hand, with Davis utilizing a photographic rendering process. “We used a design process where a grid was laid out on the wall.” Davis mixed the paints so that when it came to painting the mural, students were able to use an equivalent of a “paint by number” process” that would help bring a consistency to the design and success to the students.

“It was easy for the students to develop confidence,” says Weir. “This was a great process that enabled me to share my love of nature with the students,” says Davis.

The first mural received such positive feedback, that Wier obtained funding to extend the mural to include the coastal landscape. And now, the third phase of the project is underway, as students work in the classroom creating two free-standing murals- one of which will be displayed at the Round Valley Public Library and the other at the Laytonville Public Library.

“One of our goals was to find a way for the work of the students to be experienced outside the Juvenile Hall setting,” says Weir.

“It’s so difficult to share the great work that happens in Juvenile Hall,” says Barrett. “This was a way for youth to share their story while creating a project that was part of their rehabilitative work.”

On an average day, 3 to 5 students worked on the project. “We had music going while the students were painting, talking and laughing,” Davis explains. She read excerpts of Kate Marianchild’s book, “The Secrets of Oak Woodlands.” The mural’s central location means it can be seen daily by students during exercise time and by family members when they visit their kids.

“I keep looking at the murals and discovering something else I didn’t see before,” says Barrett. The murals are filled with the signature plants and wildlife familiar to anyone who lives in the county- elk, red-tailed hawks, bees and butterflies, whales and squirrels. Bay trees, oaks, trilliums and acorns, newts, urchins, tide pool critters and towering redwoods bring color and an enhanced sense of place to the quad area, to the benefit of those residents whose sense of place has been significantly curtailed.

“It’s not unusual for a student to point out an area of the mural they worked on,” says Barrett.

The smaller but still sizable free-standing murals are being created through the utilization of a photo of the original mural and employing the magic of carbon transfer paper. The designs were slightly modified to reflect the requests of stakeholders. The Laytonville Library’s mural will have a red fox included. Students added basket-making grasses to the foliage on the Round Valley Library mural.

The addition of the free-standing murals at the two libraries create a way for the students to share a positive experience they had while they were incarcerated, and just as importantly, notes Barrett, enables the public to see the student’s work.

“Because of confidentiality, it’s very hard for the public to get a feel for these kids. The typical county resident would never be able to see this mural, and now they will.”

Davis developed the processes for creating the permanent murals and the free-standing murals for the libraries with the idea that a rotating group of students would be working on the project. “We created processes so that everyone who participated could have a successful outcome, and so that a changing youth population could successfully come into the process, from conception to design to painting,” she explains.

There were many other benefits to the project, according to Barrett.

“This was hard work. I witnessed the kids working on 100-degree days, using tiny brushes to paint in the tiny details on plants or animals.

“We are so grateful for this opportunity to work with Juvenile Hall and Danza,” says Wier. “With this grant, we’ve been able to help fulfill the Juvenile Hall mandate to create4 a home-like environment while giving youth an opportunity to gain employment-related skills and create works of art that will be exhibited in their home communities.”

The students spent hundreds of hours following directions that led to positive outcomes,” Davis notes. “I had great experiences with these young people. They were respectful, good listeners and we got a lot of work done,” she smiles.