…will be one of six artists in the Endangered Planet exhibit at the Corner Gallery, in Ukiah, January 3 – 25, 2019.

I have been involved in the arts, in one way or another, for most of my adult life. Straight out of high school I started attending Pierce Community College, known for their art and agricultural departments. I took double class loads for four years majoring in art, with a minor in biology. 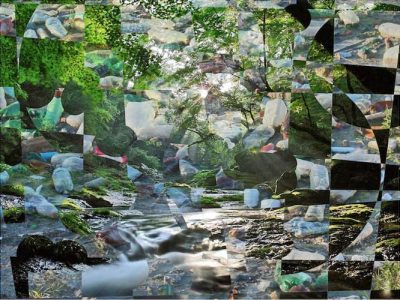 I have had works in some group exhibitions including Barnsdall Park, Pierce and the now-defunct Site Gallery in Los Angeles, mostly in the period of the late 1980s through early 2000s. I spent much of the 1990s working closely with artist Lun*na Menoh to assist her in materializing her artistic vision. In 1997 I started a handmade card business making multiples as well as a good deal of miniature originals. In more recent years I’ve spent part of my time freelancing as a graphic designer.

In recent years I’ve become increasingly concerned about political and environmental issues and devote what time I can to activism. Our ongoing global environmental crisis has inspired this series which I’ve entitled Nature in Turmoil.

All work I’ve contributed to the Endangered Planet show was created by means of digital collage and alteration of existing photographs. Displaced fragments, photo-negative effects, elements of our shared visual language such as rings that might suggest wave transmission or oversized pixels as a reference to modern technology, menacing shards, the juxtaposition of the beautiful with the cautionary, and other graphic devices are intended to create an unsettling undercurrent.

Works in this series consist of a single encaustic panel and a series allowing up to 200 giclees of each work, printed on archival rag paper (typical substrate used for etchings and lithographs). Both the encaustic panels and prints and large in size. The panels are images printed on a translucent paper embedded in an encaustic layer. Part of the beauty and expressiveness of encaustic wax are the drips and swirls occurring as the wax is spread which reveal the hand of the artist.

As with all visual art, any intrinsic value must be of a visual nature. If the work itself does not document or suggest any issue or convey anything of visual worth, then excessive verbal explanation given to prop it up is fairly useless. As stated concisely by Edward Hopper “If you could say it in words there would be no reason to paint.”

It is my hope for this body of work to appear pretty straightforward -for it not to require a lot of narration and that it can offer something that stays with the viewer rather than a mere passing diversion.

I am an artist from L.A., currently residing in Ukiah, CA.
Concern about the ongoing global environmental crisis has inspired my recent work.