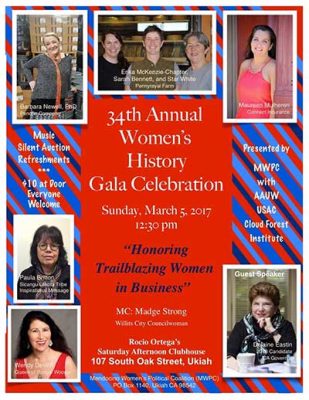 Two Mendocino County women plus a trio of women will be honored who embody this year’s theme, “Honoring Trailblazing Women in Business.” Maureen “Mo” Mulheren, Connect Insurance; Barbara Newell, PhD, Penofin Company; and Erika McKenzie-Chapter/Sarah Bennett/Star White, Pennyroyal Farm have been selected as the 2017 Honorees who exemplify their outstanding entrepreneurship through their diverse business ventures, community endeavors, and achievements.
Delaine Eastin
The Women’s History Planning Committee is honored to feature guest speaker, Delaine Eastin, 2018 Candidate for Governor of California. After completing her Master’s degree in Political Science from U.C. Santa Barbara, Eastin taught at several community colleges and worked as a corporate planner while serving on the City Council in Union City until she was elected to the CA State Assembly in 1986. In the four terms she served in the Legislature representing parts of Alameda and Santa Clara counties, Eastin served as Chair of the Governmental Efficiency and Consumer Protection Committee.

In 1995, Eastin was elected to serve the first of her two terms as State Superintendent of Public Instruction in California. The only woman to ever hold this office, Eastin supported groundbreaking initiatives to include: enlisting California to become the first state to improve the nutritional value for school lunches and advocating for universal preschool and full-day kindergarten. Eastin served as a champion for public libraries, wiring schools for technology, and stronger technical and vocational training for students. She advocated creating statewide standards and systems of accountability, ensuring reduced class sizes in grades K-3, increasing parental involvement and teacher training, and creating safe and healthy school environments.

Delaine was the first Executive Director of the National Institute for School Leadership, and a Distinguished Visiting Professor of Educational Leadership at Mills College, where she directed the Center for Civic Engagement and Women’s Leadership. She now does speaking and consulting, and has launched her run to be our next governor. She serves on a number of boards that support the education, health and civic engagement of children from preschool to college.
Paula Britton
The gala celebration will open with an inspirational message from Paula Britton, Tribal Administrator for the Round Valley Indian Tribes. Prior to her position in Covelo, she was the Environmental Director for the Habematolel Pomo of Upper Lake in Upper Lake. She is a representative to the EPA Region 9 Regional Tribal Operations Committee and the Vice–Chair of the EPA National Tribal Operations Committee. Britton is a member of the CA State Water Plan Tribal Advisory Committee and the CA State Groundwater Tribal Advisory Committee. Britton is a Sicangu Lakota (Rosebud Sioux) from South Dakota and grew up on the Standing Rock Reservation.

Having lived on or near eleven reservations in the western US as a child and adult, Paula Britton has worked with seven Tribes across the Nation and as a consultant for additional Tribes. She was a founding member of the Mni Sose Water Rights Coalition; a coalition of 28 Tribes in the Missouri River Basin in three states that were affected by the damming of the Missouri River in the early sixties under the Pick Sloan Plan. She has worked extensively as a Tribal liaison with federal, state and local agencies and as a project facilitator. She is married to a Round Valley Tribal member and has worked with California Tribes for the past fifteen years.
Wendy DeWitt
Setting the festive mood for the Gala will be blues pianist, Wendy DeWitt, Queen of Boogie Woogie. She has performed with Hank Ballard and the Midnighters, Charlie Musselwhite, Otis Rush, and Jimmy Thackery. DeWitt has appeared at the Cincinnati Blues Fest, Boston Symphony Hall and the San Diego Museum of Art. She has also performed at the San Francisco Blues Festival, St. Croix Blues and Heritage Fest, Les Nuits de Boogie Woogie in Paris, and festivals in Spain, Switzerland, Austria, Belgium, and Hungary. Wendy regularly tours and produces the annual Queens of Boogie Woogie and San Francisco International Boogie Woogie Festival.

Born in San Francisco and brought to the blues at the age of 10 while growing up over a store in Glen Ellen, CA, Wendy DeWitt’s passion for music led her to Chicago Blues and Texas Boogie Woogie. Upon her recent move to Ukiah her local area performances have included the 25th Annual Professional Pianist Concert at Mendocino College, Blue Wing Blues Fest, and the Blue Wing Inn Concert with Conversation. In honor of International Women’s Day, March 8th, Wendy DeWitt will present “Blues & Boogie Woogie Gals: Celebrating Women with 88 Keys” at the Mendocino County Library in Ukiah.

Madge Strong, Willits City Councilwoman, will serve as the MC. Co-sponsors of the Gala are: AAUW-Ukiah, Cloud Forest Institute, and the Ukiah Saturday Afternoon Club. Everyone is invited to attend this Women’s History to celebrate women of our community, enjoy the boogie-woogie music, bid on the silent auction, socialize with tasty refreshments, and make new friends. 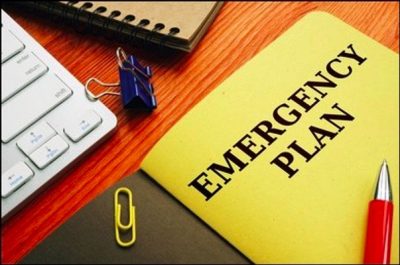 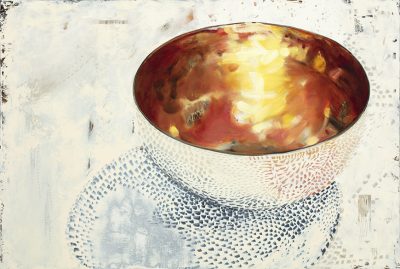 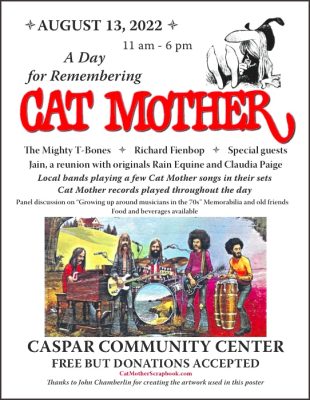 A Day for Remembering Cat Mother