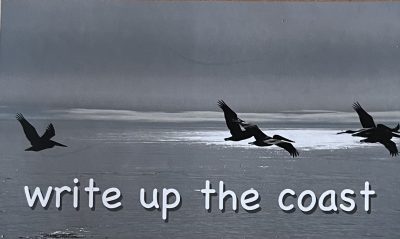 The Inaugural Workshop will take place Saturday & Sunday, December 10 and 11, 9 am to 11 am.
This two-day workshop:

Will focus on finding the story inside of us waiting to be told.
Our different method of introduction to each other will be the first approach starting us off in the writing process.  We will then be using a series of focused prompts to build our story
Each step of the way will include comfortable, trusting and effective discussions on our individual writing. This method will help us learn how to enhance our writing
Prompts will begin as guideposts
Successive prompts will come from our own writing (this is my favorite process)
The first part of the workshop will focus on finding our story
The second part of the workshop will be developing our story into stand alone pieces or the foundation for a longer work in progress.
A reading of our work will conclude our workshop before final comments and next steps
There will be a between session assignment focused on developing your story and using what we have learned during the day for our second day.

*An additional thought would be to invite folks to hear readings of our just developed work in an impromptu casual get together immediately following the workshop.

As with each workshop I stay committed to following the dynamics of the group to move the learning process along and maintain the atmosphere of comfort, trust and sharing.

Write-up-the-coast-writers will include:
• Readings in workshops and local write-up-the-coast events at local venues.
• Eventual recordings of works to share through social media.

Write-up-the-coast workshops will:
• Offer writing workshops at community venues along the coast to allow for convenience.
• Consist of small group workshops that encourage intimate sharing and learning from workshop participants in comfortable non-judgmental atmospheres.
• Learning through writing processes to uncover writers’ inner stories; how to develop and share them.
• Focus on generating new work through prompts and free-writes process.
• Opportunities for all ages and demographics..
• Be open to all writers from novice to novelist.
• Encouragement for folks who had wanted to write but don’t know where or how to begin.
• coaching writers on voice, genre, style, dialogue and writing for different story length.
• reference authors current and past identifying some styles and mechanisms in their works.

“1/3 NY, 1/3 Washington, DC and 1/3 San Francisco.”  For the past 8 years Mark calls the Mendonoma Coast home where he lives with his husband Billy, their two Hungarian shepherds, Woof! and Ruf? in Anchor Bay. “I didn’t realize the hidden metaphor of Anchor Bay until I was here for a few years. Our home now is truly my anchor.”

Growing up in new York, Mark always says that New York is a great place to be from.  “You learn a street sense and a way of living in diverse crowds that is not taught but lived.”  He moved to Washington DC to work in radio where he sold advertising for ABC radio’s first FM Rock station, WRQX.  During that time he earned his MBA in Management from Marymount University. He moved on to two other radio stations learning radio formats and audience behavior.  The Washington Post took Mark out of radio and into the world of newspaper in the nation’s capitol. It was during that time mark was accepted into part-time creative writing at John Hopkins University where he earned his MA over three years of full time work and full time writing fit into part time structure. After 12 years at the Post’s “DC mothership” he was asked to start an experimental remote home office in San Francisco to be the brand ambassador representing The Washington Post and Washington DC.  “It was the first time of blending opposite ways of thinking. Silicon Valley was becoming the center of innovation and Washington, DC was the center of policy and regulation.  Often one didn’t understand the language of the other”. Over the next fifteen years Mark developed his relationship skills learning how to bring together groups and teams of individuals with all their differences. In 2013, Mark was awarded the Washington Post prestigious Eugene Meyer Award named after Katharine Grahams father for his career contributions and principles.

He retired in 2015 when they moved to Anchor Bay. On his first day living in Gualala, he stopped at The Sea Trader. The woman welcomed him and could tell he was new. She offered the best advice, “You need to give it at least two years.  It will take that time for you to realize who you are and how to fit in here and how all our surroundings work. Too many people give up.  Don’t.  I promise you magic.”

Mark seized what he could to understand living here.  He was a reporter for ICO.  Volunteer for KGUA. A board member of Gualala Arts Center and the Point Arena Lighthouse. He contributed to the Lighthouse Peddler and volunteered for programs at Action Network. He started a running club. In 2022, he hosted discussion groups on James Joyce, Ulysses. Everything he did was part of learning how to build community across differences.  “When I left the Post I returned my lap top and computer. Soon after, I realized my skillset and all I learned about people was mine to own.”

He continued his writing development attending significant writing workshops including Cheryl Strayed’s Writers Camp at Esalen, Dorothy Allison’s workshop at Writing x Writers, Alexander Chee at Corporal Writing. Paul Lisciky at Provincetown Writers Offerings, Napa Valley Writers Conference, Summer workshop in Chamonix, France with Pam Houston and Cheryl Strayed.  In 2015 he met best-selling author Lydia Yuknavitch.  It was a turning point for his writing as he became a regular in her workshops followed by one year exclusive mentorship with her.  In 2015, Mark was accepted to Skidmore’s New York Summer’s Writing Institute working under Garth Greenwell and a list of incredible writers.

When he partnered with Peggy Berryhill his role in the community grew.  Peggy was unconditional in teaching and trusting mark to help him grow into an integral part of KGUA while strengthening his own skills.

During his three cross-country drives in the past two years Mark decided to start “Let’s Go Bookstoring.”  A series of interviews with independent local bookstores he discovered while driving.  “It gave me a chance to talk with unsung heros passionate about reading and books who struggled through the pandemic to keep reading alive with people locked-down.  It was a fascinating learning experience about the power giving of small used bookstores.  Southland Books in Maryville, TN, The Source in Davenport, Iowa, Hooray for Books in Alexandria, Va.  Just a few.  He turned these interviews in KGUA special segments.

A discussion with Kristina Jetter, Executive Director of the Sea Ranch Lodge lead to an on-going monthly Storytelling Writing workshop.  It was this when branded his workshops as Write-Up-The-Coast.

Mark leads with passion, energy and enthusiasm. All of which he gets by watching others grow and take chances.  He started running in 2018 and since then has done half marathons in NY, SF, Humboldt and Washington DC.  He took up Canicross (running with dogs) and together he and his dogs have done countless 10Ks.