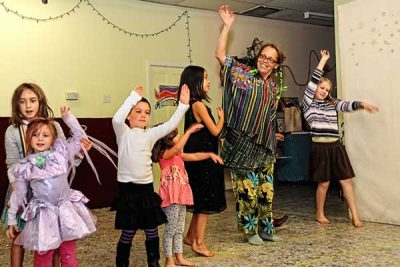 Registration for the upcoming Children’s Theatre Summer Camp at Willits Community Theatre will be held for one day only–Saturday, April 21 from 1pm to 5:30 pm at the WCT Playhouse.

According to Camp Director Mana Young, space will be available for 20 students ages 8 to 17. The camp runs from July 9 to August 19, with classes meeting on Mondays through Thursdays from 2 pm to 5 pm. The cost is $200 for the five-week camp, which includes a culminating five-show performance by students of Norton Juster’s “The Phantom Toll Booth”.

Young says the camp is designed to teach how live theater performance can empower children through teamwork and dedication. Each week there will be a 30-minute mini-workshop featuring local thespians from Willits Community Theatre’s alumni. Students will enjoy lessons in acting with improvisation, characterization, blocking or stage action as well as the other side of the stage with lighting, sound, set design and stage management.

Young will be accompanied by Angela Lau of La Vida Charter School, a parent and associate artist for The Willits Young Actors Theater. Christina Leinwetter from Willits Young Actors Theater and active parent/volunteer from last year’s WCT’s hit children’s drama, “The Trial of the Wicked Witch”, may also lend a hand. With three adults the three-hour day camp will be divided up into groups for quality coaching as well as group rehearsal time.

No prior experience is required, says Young, who has been actively teaching theater arts to local children for the past 13 years as the director/ producer of Willits Young Actors Theater. Young began her own career in live theater at the age of 6 and throughout her professional career has gained experience as an actor, dancer, director, lighting and sound technician, stage manager and costumer. Young moved to the Willits area in 2002 and immediately became involved in community theater while starring in many WCT productions. She has been producing, directing and writing plays for young adults and children for more than 25 years.

Young says, “I teach the children that the stage is theirs, that it belongs to them and that when they feel the connection to their audience, it has to do with teamwork. I love watching how returning young actors encourage the new actors to come alive on stage. There are not many things much better than this exchange.”

The camp’s culminating five performances of “The Phantom Toll Booth” from August 10 to 19 will be co-produced by the students. Young says every child will have a role in the production. This children’s classic tale brings themes to the imagination and may remind one of a combination of the Wizard of OZ and Alice in Wonderland. The camp simply promises to be a special opportunity for local children to experience learning a full routine of theatre arts as well as working toward producing a live performance, says Young.

The WCT Playhouse is located at 37 W. Van Lane behind Shanachie Pub. For more information on the camp, contact WCT Producer Mike A’Dair at 459-1576 or WCT Managing Director Christina Patterson at 702-686-6953.