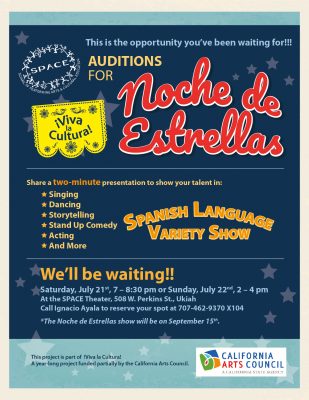 NOCHE DE ESTRELLAS is a program presented by SPACE that focuses on Latino cultural performances in the greater Ukiah Valley.

Noche de Estrellas (or “Night of the Stars”) is an evening dedicated to performances by members of the local Hispanic community and presented primarily in Spanish. High school students, vineyard workers, people from all walks of life, audition to perform.  The cast has been as large as 80 performers of all ages and the audience has filled the 500 seat Ukiah High School cafetorium.

Noche de Estrellas is a unique event — a place where the Mexican American and Anglo communities interface and share a night of entertainment.  Folks get to shine at their “Night of the Stars.”

This project is part of !Viva la Cultura! a year-long project funded partially by the California Arts Council.