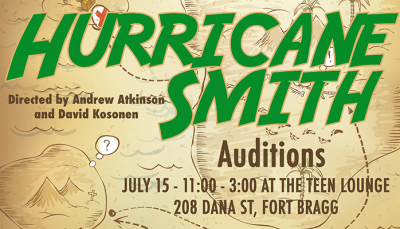 Alternate audition date available for those unable to attend on July 15. Please e-mail producer Nicole at nicolemreiter@gmail.com for more information.

Ages 10 to adult preferred. Will make exceptions based on comedic ability/maturity. This is comedy/satire show that needs to flow non stop. Auditions will consist of singing and reading from the script. Please prepare a song that shows off your vocal range.

Show dates: Performances will run November 3 – 19. Friday and Saturday at 7:30 and Sundays at 3:00 (must be available for all performance dates)

Rehearsals begin late August/early September. Rehearsal schedule TBA based on the availability of cast and crew.

Plot: The setting is the stage of a school auditorium where a schlock film director is wrapping up his latest epic, ’Monster On Campus.’ Enter Gloria Daily, fresh from her creative writing class, with an Indiana Jones-like script under her arm. Trailing behind her are members of the drama club who intend to ’act out’ the wild plot for the disagreeable film director. And what a plot! It concerns Hurricane Smith, famous explorer, whose mother was eaten by crocodiles and whose father disappeared in the Amazon jungles on a search for the fabled ’Garden of the Golden Monkey.’ Parentless, Hurricane is raised by a gorilla. Twenty years later a mysterious foreigner delivers a ’Golden Monkey’ to Hurricane, and the young adventurer sets out to discover its meaning.