Posted by Gualala Arts ; Posted on
Call for Artists - DEADLINE : 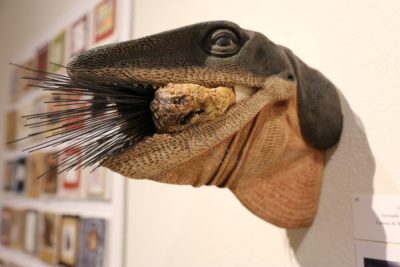 Evan Hobart was introduced to clay as a young child in 1993, when he participated in a ceramics after-school art program in the San Geronimo Valley in West Marin.

Hobart has taught ceramics at San Jose State University and Medicine Hat Community College, as well as private classes at Sweet Spirit Ceramic Studio in San Rafael, California. From 2011-2012 Hobart was an Artist in Residence at Medalta in Medicine Hat, Alberta, Canada.

Evan is currently the Ceramics Program Manager at the Mendocino Art Center. Evan is also the ceramics professor at Mendocino College in Fort Bragg. Hobart’s work is exhibited in the USA and Canada, and is represented in many private collections throughout California.

The annual Salon & Salon des Refusés is the largest exhibit at Gualala Arts aside from Art in the Redwoods; it has the largest number of entries of any other open call show and fills both the Burnett Gallery and Elaine Jacob Foyer. The Salon is sponsored by generous donors; not by Gualala Arts or the North Coast Artists’ Guild. Many artists save their best new art for this exhibit, as the Salon has gained much notoriety as a judged show by well-qualified people in the arts one that provides significant awards.

The original Salon des Refusés was an art exhibition that took place in Paris in 1863, showing works that had been rejected by the official Paris Salon conservative judges. These judges represented the French Academy and were advocates of traditional, orthodox style of painting and sculpture. In 1863, they rejected almost 3,000 pieces of work which resulted in loud protests by the artists. Emperor Napoleon III, ever sensitive to public opinion, ordered a new exhibition to be organized – dubbed the “Salon des Refuses” – in order for the public to judge the merits of the artwork themselves.

In the spirit of the original Paris Salon des Refusés, all visitors will be able to vote for the “People’s Choice” awards. In fact, many artists prefer to be selected as a “reject” to receive the public’s opinion!

History and inspiration of the Paris Salon

Gualala Salon has its origins in the annual Paris Salon sponsored by the French government and the Academy of Fine Arts. The Salon began in 1725 and became a showcase of the best academic art. A medal from the Salon was assurance of a successful artistic career; winners were given official commissions by the French government, and were sought after for portraits and private commissions. In those days exhibiting in the Salon was one of the only means artists had of marketing their work and therefore exclusion from its annual selling exhibition threatened their reputation and livelihood.

In 1748, a jury of awarded artists was introduced. From this time until 1890, the Salon was considered the greatest annual or biannual art event in the Western world. The Salon exhibited paintings floor-to-ceiling and on every available inch of space. Printed catalogues of the Salons are primary documents for art historians. Critical descriptions of the exhibitions published in the gazettes marks the beginning of the modern occupation of art critic.

The Gualala Salon and corresponding Salon des Refusés are inspired by the original Salon des Refusés held in 1863 of the refused artwork by the official Paris Salon. The exhibition was ordered by Emperor Napoleon III after the outcry caused by the number of rejections. The increasingly conservative and academic juries were not receptive to the new Impressionist painters, whose works were usually rejected, or poorly placed if accepted. Some were rejected from the ‘official’ exhibition because their works were considered by the committee too subversive and some even thought that these artists posed a danger to society.