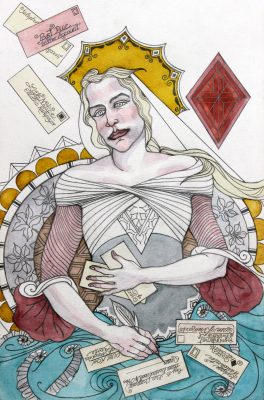 I am an artist, historian and former politician. 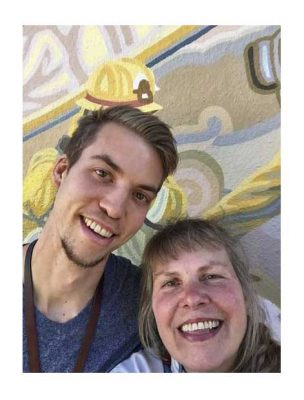 www.historymural.com will show you how so many things in my life and work have recently come together in the perfect project: my monumental history mural on the north wall of the Ukiah Valley Conference Center.

But let’s back up a little. My diverse portfolio is partly the result of making a living through art in the modern world. Before photography was invented, everyone would want me to create their image. Now, it’s really only dogs that

I am an artist, historian and former politician.

www.historymural.com will show you how so many things in my life and work have recently come together in the perfect project: my monumental history mural on the north wall of the Ukiah Valley Conference Center.

But let’s back up a little. My diverse portfolio is partly the result of making a living through art in the modern world. Before photography was invented, everyone would want me to create their image. Now, it’s really only dogs that people commission portraits of. I even paid a vet bill once with a mural of dogs, cats, birds, rabbits, and mice. At Point Arena High School, I painted a face that gets walked on: the sports mascot, a 6 ft. grinning pirate on the floor of the basketball court. A local big wave surfer modeled. Art entwines with life… and also its loss. That surfer was part of my California family and I portrayed him as a life-size 3-dimensional winged angel after his death at sea. The lady who commissioned this work died recently and now the angel has come back to me.

It all started in Wisconsin’s dairyland, where I was raised by an artist mother and poet father. My mom supported us on graphic design, and as a toddler I worked at a little table alongside her. Our house was filled with paintings and books.

It was the Age of Aquarius and I knew I was supposed to be at Woodstock, but it was impossible. I was ten. 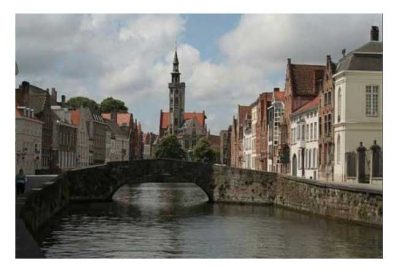 I spent my senior year as an AFS exchange student in Belgium, speaking only French and learning to take class notes in perfect outline form. I discovered the art of conversation, four-hundred year old homes and good coffee. It was there that I began to feel the pull of an old culture living still where it had always been.

Back from Belgium, I attended Rice University in wonderfully hot and humid Houston, TX. I earned a BA in Art and French, then a BFA in painting, and an MA in Art History. During graduate study, I encountered a work whose untold story began to open before me, becoming the subject of my thesis, The Double Portrait of Two Men in the Museum of Fine Arts, Houston. 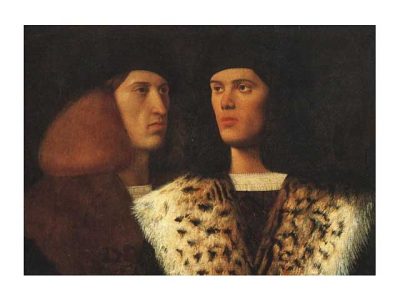 And the story blossomed again with stunning new research on the part of several scholars, leading to my recent paper, Beloved Disciple: Vittore Belliniano and a Double Portrait of Two Men, which explores the possibility that the exalted Venetian Renaissance painter Giovanni Bellini and his head of studio were lovers. 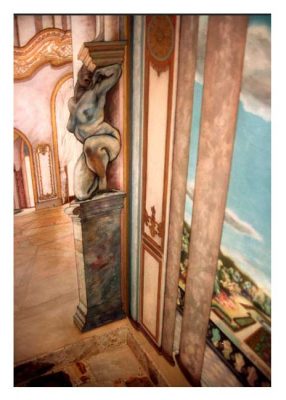 I taught art history for several years at the museum school, painted one of my most exquisite mural in a private bathroom, and became a single mother of two. But I yearned for the ocean! Not the Gulf of Mexico, the Pacific Ocean, which I had never even seen. And Northern California to be specific, because friends had told me “Your kind of people live there.”

My boys and I left town in a converted school bus with a wood stove and beds. We found Point Arena located with its lighthouse on a jutting tip of land WEST of the San Andreas fault.

This is the other California, where populations are dwarfed by the ridged landscape and pounding ocean.

This is exactly what I was looking for, except I forgot that it was going to be impossible to get my PhD. The consolation prize was my life in politics as City Council member and then Mayor of one of only four incorporated cities in Mendocino County.

Point Arena is the seventh tiniest city in California, which meant the city staff was small and overworked, and our jobs as elected officials were large and unending. On top of legislative activity, we also had the tasks of employee hiring, evaluating, and firing. It helped to have an eye for detail. It didn’t help to earn only $100 a month. (See more about fights and triumphs in city government and much more of my artwork on my main website www.artgoddess.com which will be sleek and modern by Christmas!)

My boys and I lived in our bus in the fragrant manzanita forest for a year and when we moved to town I supported us with art and rent. I took jobs ranging from art cars to tombstone design, from wedding dresses to sewing a life-size brocade torso complete with all female reproductive parts for a doctor. I created the Velvet Vulva line of purses for the lesbian, feminist and enlightened market. I painted curbs and hemmed pants. Business signs and design services were a mainstay. I picked blackberries, ate wild mustard greens, baked my own bread, and gleaned apples from the ground. We took in a parade of roommates to make ends meet. My house was teeming with the boys and their friends, and was full of books and paintings. Recently my son who learned Mandarin and now lives in Taiwan paid me a compliment. He said, “Mom, I never knew we were poor.” And of course, in real terms, we weren’t.

All of these experiences have caused me to reflect on the ultimate purpose of the artist and the historian. Art history is a jeweled necklace, a string of masterpieces threaded on inspiration from around the world.

Yet art was made by, for, and about real people who led complex lives. A man who loved men and didn’t have wealth or a noble patron in 15th-century Venice could be burned alive in the Piazza San Marco. Ghosts walk in those grand cities and on the quiet streets of my own town, where no more than a century ago, it was permitted to shoot an Indian after dark. Forced servitude, kidnappings and massacres took place across California, including multiple occurrences here in Mendocino County. During the 1850s, the new state government’s official position was denial of rights and extermination was seen as inevitable.

Depravity haunts exaltation, and the sacred charge of the historian is to give voice to the fallen, to shine light on the common and hidden, as well as the great.

As a Renaissance painting mutely accomplishes merely by surviving, the historian keeps a subject alive with his published words, and the muralist with her imagery. I love the motto of Yale University: Lux et Veritas. Light and Truth – with one we find the other. 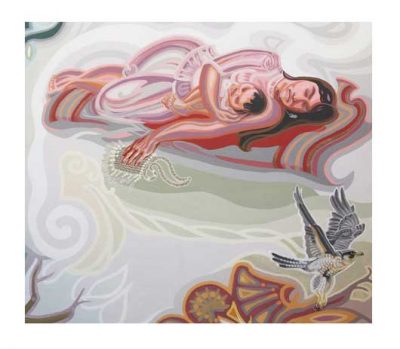 My latest and largest project, the huge historical narrative mural on the north wall of the Ukiah Valley Conference Center, is the result of these threads interweaving. I could use all those hours of life drawing, all of that house painting, all my knowledge of narrative art through the centuries, and all my experience working with the public in administration. This is a public work for everyone and about everyone. It contains over two-hundred portraits and tells many stories of people who live here now. People can see why this art has meaning. They understand the argument I once presented to a dear friend over dinner:

“You will be fascinated,” he was informed, looking doubtful as he questioned art history and the importance of such things. “History is to humanity as memory is to the individual,” I said. We are each of us walking backwards into the future. “Would you want to do that with your eyes shut?”

My companion smiled, saw it was true, and ordered champagne, since he was about to hear what had been revealed by a Venetian inventory from 1569.*

*That the great collection of Gabriele Vendramin included a little box portrait of Giovanni Bellini with the portrait of Vittore, his disciple, on its cover.

MORE ABOUT THIS ARTIST 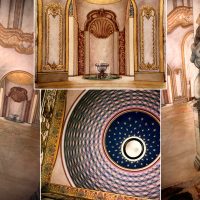 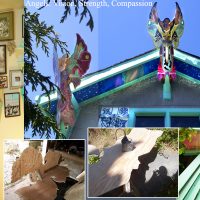 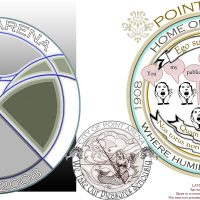 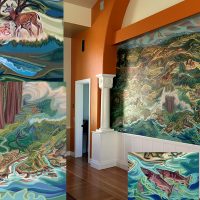 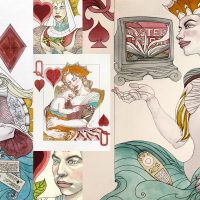 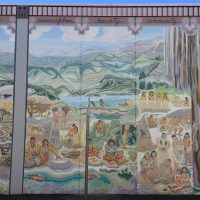 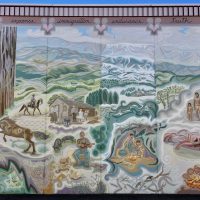 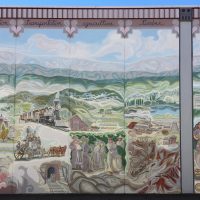 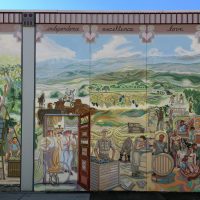